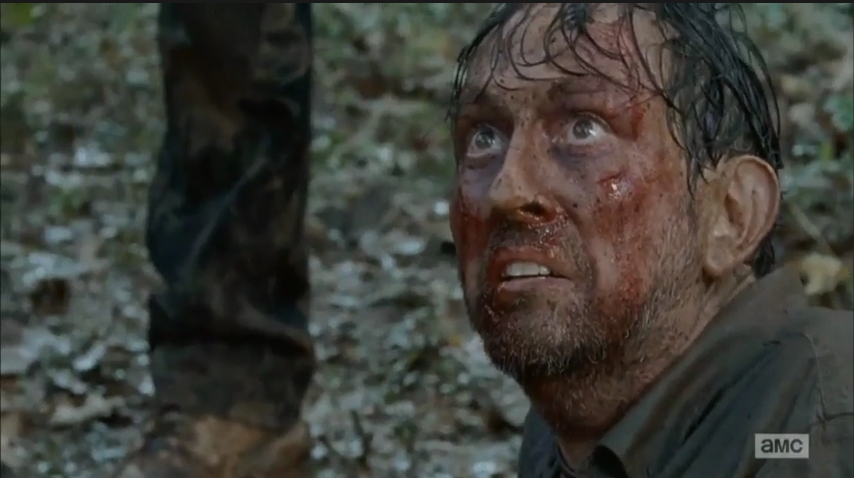 Finale this past month. Talk about a walking dead hustle! He ran, he fell, he jumped! No spoilers, but as you can guess, Kevin Patrick Murphy did his own stunts! Murphy described working on the set as “an 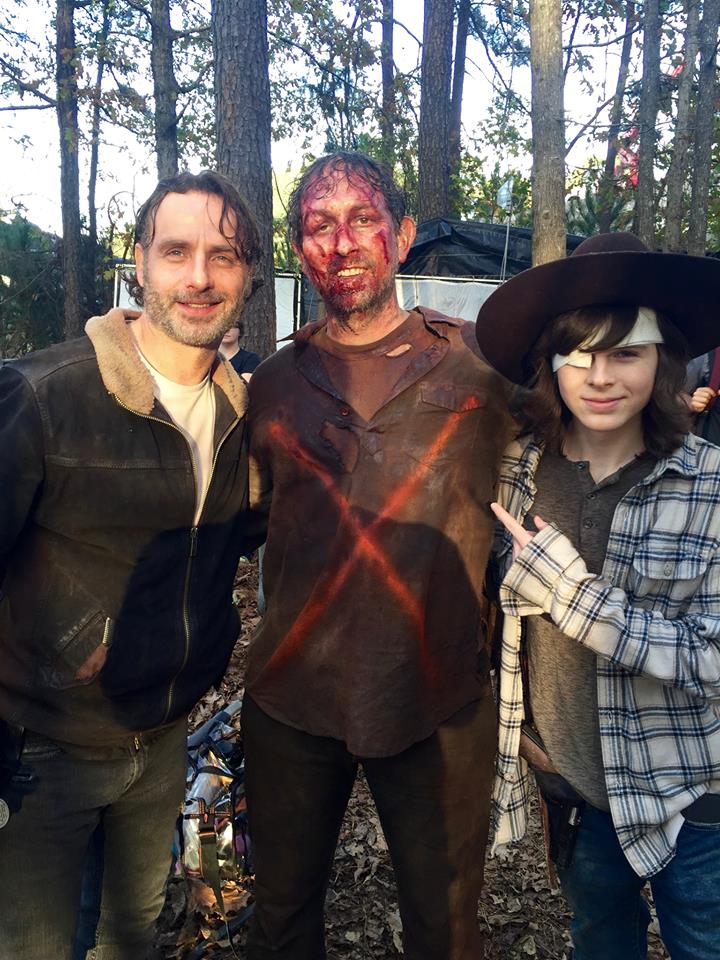 amazingly well oiled machine. I was truly humbled and honored to work with such a professional group of actors and crew members. The cream of the crop. It was one of the highlights of my career to date.”  Pictured to the left is Murphy with stars Andrew Lincoln & Chandler Riggs (Rick & Carl). If you aren’t familiar with the show, The Walking dead is a survivalist story. Waking up in an empty hospital after weeks in a coma, County Sheriff Rick Grimes (Andrew Lincoln) finds himself utterly alone. The world as he knows it is gone, ravaged by a zombie epidemic. The Walking Dead tells the story of the weeks and months that follow after the apocalypse. Based on Robert Kirkman’s hugely

successful and popular comic book series, AMC’s The Walking Dead is an epic, edge-of-your-seat drama where personal struggles are magnified against a backdrop of moment-to-moment survival.

What a fun kick off to spring we had here at The Actor’s Center of Asheville last month! Our Teen 6-week intensive class students had a blast working with Robert Dale Walker and Kevin Patrick Murphy. A couple of the older teens had such a great time in class, 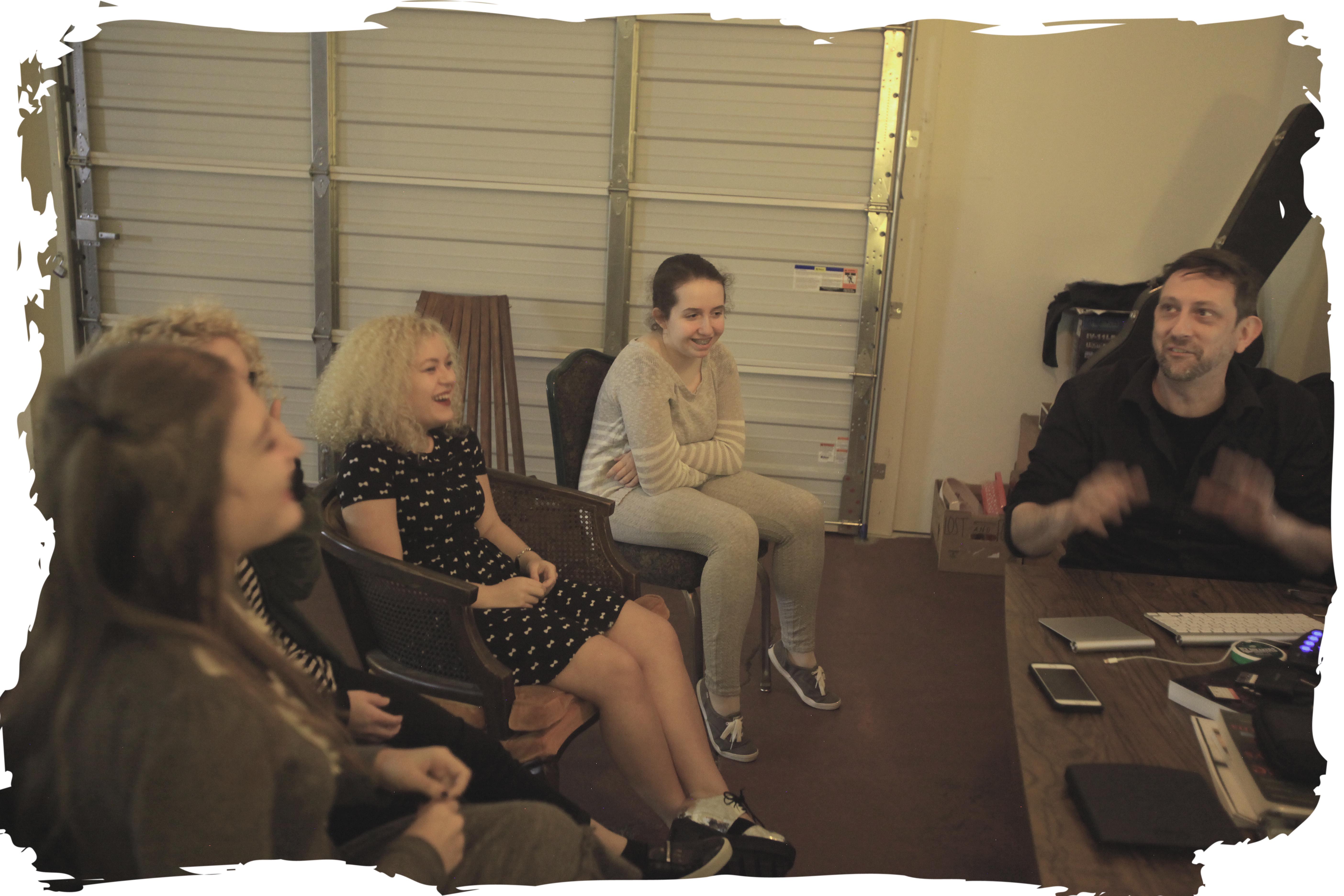 that they will be joining The Actor’s Center Of Asheville family this next month as they cross over into our adult classes. In addition, we’d like to congratulate two of our teen students Tiam & Tasnim, who’s band Posh Hammer, just celebrated their CD Release Party at The Asheville Music Hall this month. Tiam & Tasnim also performed for The Actor’s Center of Asheville’s Scene night as well, slaying a scene from the hit Broadway musical, Hamilton. You can catch the girls band next at The All Go West Music Festival on June 25th from 3:30-4:10pm at Isis Music Hall (on the Infinite Truth Stage)

Our teen class was full of such creative powerhouse young ladies who all gave glowing reviews & ratings of the class. 16 year old Noelle Munez said,

We hope to either offer a week or day long late summer/early fall teen intensive in the coming months. Stay tuned for more details on that. If you think your teen would be interested in enrolling, &  you’d be interested in helping us to organize students for something like that, please contact us to start a dialogue.

This past April, we sat down with the lovely and talented, Eulyn Womble at The Actor’s Center Of Asheville to talk about her experiences of working on professional film, tv and commerical sets as a costume designer, how she came into her style aesthetic as a designer, how she works with different types of crews and the role she plays in the production process. She illustrated a bit about her creative process, & gave us a peak into how she approaches characters in a story when she’s designing the wardrobe for a show or film. 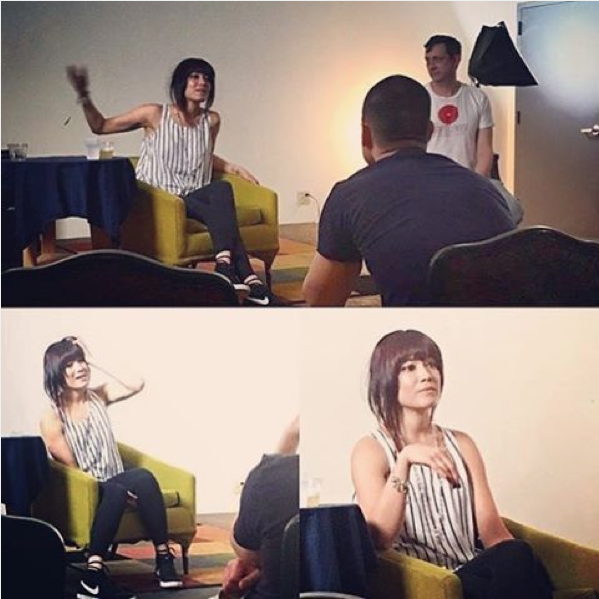 Eulyn focused on her most recent work creating some of the looks for AMC’s record-breaking hit series, The Walking Dead, for which she worked as the head costume designer for the past 6 seasons. She confessed that when she first started working on the show that she had no idea how hugely popular a show about zombies would actually become. Eulyn worked with production & the directors, immersing herself into how she envisioned each character’s life & persona in the post apocalyptic reality each character was living, infusing authentic parts of her own personality into some of the characters as well. Eulyn has always had a vast adoration and fixation with angels, and angel wings more specifically. You could say that it’s become part of her signature as a designer in many ways. In addition to helping to create Norman Reedus’s character, Daryl Dixon’s look, Eulyn added her signature to his character by adding angel wings to the back of the leather biker vest he’s always wearing. (Only fitting for the deeply loved character in the show who helps protect his group with a crossbow as his weapon of choice) Eulyn also talked about how she creates her own sketches & approach for each character while staying true to the visual apocalyptic style that the comic book represents. “I made Neegan’s jacket and it’s one of my favorite pieces. I kept the design very close to the look in the comic. Neegan was one of my favorite characters to help design the look for, aside from Daryl… And Michonne of course, who is my hero.”

In an article by Susan Karlan from Co.Create.com eloquently says about Eulyn, “If she does her job right, you don’t notice it. You feel it. “ The article went on to say, “Eulyn not only has a real sense of style and a great eye, but she also understands that costume design signifies a character’s emotional state,” says executive producer and show runner for seasons two and three, Glen Mazzara. ” She’s been very creative about showing how our characters feel about themselves and each other through how they dress. She’s also taught me a lot about how people would change their sense of style over time in different circumstances.”

Eulyn puts all of herself into her work, and you can feel it. She shared with us that even when her assistants would dress all of the extras, or zombies for a specific shoot, she would still walk around to each zombie to give her “blessing” first. Here is a great little video giving you a look inside what a day on the set of twd with Eulyn would have been like (this is a clip from inside twd Season 2) :

Eulyn explained her journey into the world of costume design for film and TV, pointing out that she wasn’t encouraged to follow this career path, but in fact to get a degree in Bachelor of Commerce, which would have lead to something like accounting, banking, or financial management, among other business oriented types of careers. While she followed her parents wishes to pursue something professionally stable, Eulyn continued to be drawn to work in fashion, as it was still echoing in her mind. She decided to finally go for it. Starting as a model first, she was able to make her way into the fashion world getting a “behind the scenes” first hand look for the industry she felt so inspired & called by. After having the opportunity to style someone for a fashion show once, she explained that she caught the bug and knew where it was she belonged in the fashion industry specifically, which was designing & styling.

Eulyn’s talents were nurtured as she grew up, but her dream was her’s, and hers alone to nurture and chase as an adult. Her journey wasn’t always easy. She knew what she wanted to do with her life, and she let her drive to create, lead her onward. Following our calling can get overwhelming at times. Eulyn reminds us to be brave and hold steady to your dreams. “Everything you are going through, is preparing you for what you asked for…”. If at first you don’t succeed… —>

In addition to showcasing some great talent, we also showed our support against inequality & HB2, and FOR love by printing a limited edition run of TACA T-shirts, in which a portion of the proceeds will go to Campaign For Southern Equality, as did a portion of the proceeds from all sales on Scene Night. Visit The Actor’s Center Of Asheville to show your support & purchase your shirt!

To learn more about joining class & The Actor’s Center of Asheville, be sure to contact us to set up your interview!