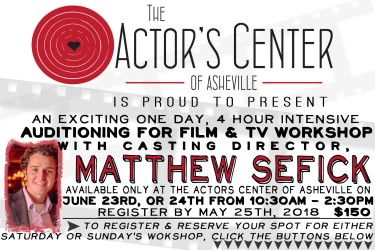 SO MUCH NEWS. Most of it will be in our upcoming and long overdue newsletter! In the meantime, we are excited to announce a very exciting and valuable one day workshop happening at The Actor’s Center of Asheville on June 23rd, & 24th with casting director Matthew Sefick. As an added bonus, currently enrolled TACA students can attend this workshop at a discounted rate! We will post a direct link for them on our private fb page.

Matthew Sefick, CSA is a casting director based out of Charleston, SC.  In 2005 he graduated from the University of South Carolina with a Master’s Degree in Media Arts.  Since college he has gained over 12 years of experience in the Film and Television Industry and is a member of the Casting Society of America as well as the Television Academy.  He began working in casting in the offices of Lifetime’s hit series Army Wives in which he helped cast over 100 episodes of the show and was named Casting Director for the final season of the series – Season 7.  Since then he has cast feature films, television shows and commercials in North Carolina, South Carolina, Virginia, Georgia and Alabama.  In the summer of 2017 Sefick wrapped up casting the first season of a series called Mr. Mercedes based on a Stephen King novel of the same name that aired on DirecTV’s Audience Network.  Sefick is excited to have recently wrapped up work on season 7 of Showtime’s Homeland, which aired in the spring of 2018.